Another review! Again this item comes from Lord of Battles. When I did my re-view of the Quatrefoil belt nearly a year ago, I was surprised to find that the box it came in had a second belt in it. I contacted Lord of Battles to be sure, and it was in fact sent intentionally for review.

I actually wrote the review the same time I did the Quatrefoil belt, but at the time I couldn’t find the belt for sale anywhere. I tried to get an estimated cost from both Lord of Battles and Kult of Athena, but got radio silence. I’ve kept this in my drafts, since I don’t see any point broadcasting an item review no one can buy, hoping I’d see it around someday. That day has come, and you can find it on Kult of Athena in both Red and Brown for $41.28 + shipping.

The belt is made by Lord of Battles, a company out of Dehra Dun, India and they don’t sell their products directly. They also work with cinema, their Facebook and Website proudly display pictures of people in armor from the TV Show Merlin, for which I presume they made the armored costume that the principle talent wears. Their online catalog is expansive and they seem to produce a little bit of everything from armor to clothing to camp gear. As for this particular belt, it is a long red leather mounted belt with fancy chape and buckle. The motif on the chape and buckle match, as well as the color tone of all the mounts.

The holes between the mounts are all about 1 1/4″ (3.17 cm) apart, with variance of 1/16″. The only larger distance between hole punches is where they cross over a belt mount. The belt comes punched with 9 holes, the first of which starts about 3 feet (.9 meters) from the buckle. The farthest pre-made hole is 3′ 10 1/2″ (1.16 m) from the buckle. Overall it’s a much longer belt than the quatrefoil one, at 5′ 8 1/2″ (1.73 m) overall. It has a total of 14 mounts. Something interesting about the mounts is that, since they’re riveted with one post instead of two, they can rotate. Some do so easier than others, which tells me that they weren’t intended to do so. 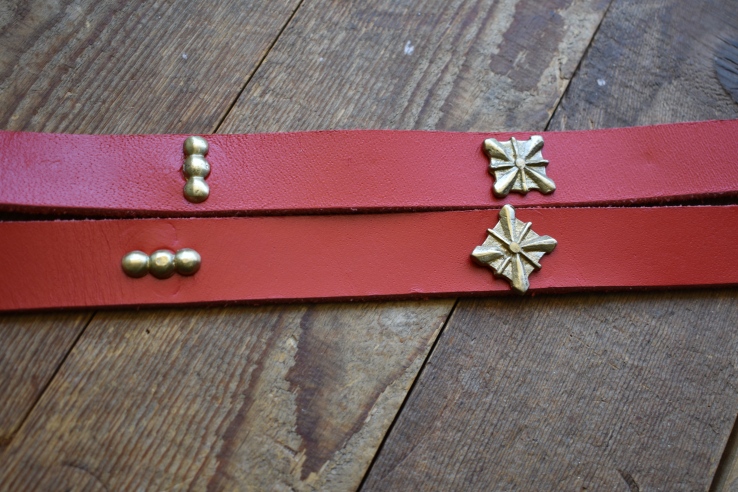 Many were stiff and took some work, but I did get every single one to rotate at least 90 degrees. While I doubt it’s intentional, I kind of like it. It gives you the opportunity to customize the belt somewhat, by turning various mounts you can create your own pattern and look. But if you use this belt for something like a dagger belt on your full harness kit, taking hits might cause them to rotate against your intention. Food for thought. 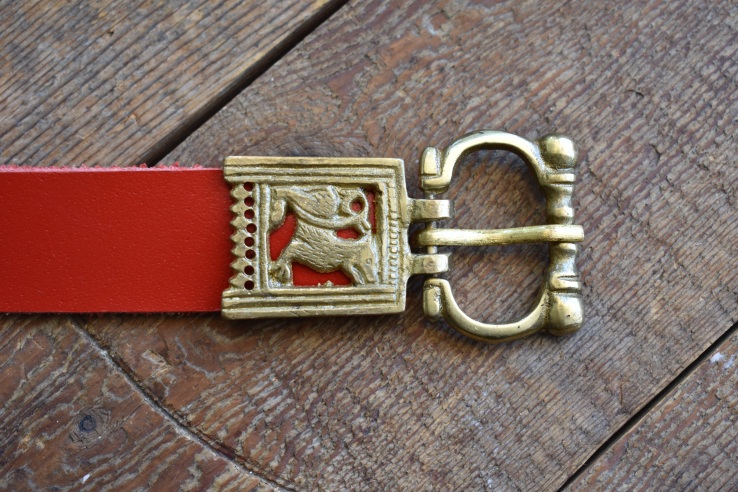 I have to say, this belt is really attractive. I never considered myself a red belt kind of guy, but the first thing I did when I unrolled it was grunt in approval and smile. It has a very charming look, and the pattern of alternating mounts works well. I haven’t been able to find any example that this chape and buckle are reproduced from, but the wolf styling has a very medieval manuscript look. The whole thing has a much higher status look than most belts, the detailed casting, the fancier mounts, the bright charming red. When I handed it to a nearby woman to put on for our perspective shots she immediately got very excited. It caused an immediately positive reaction, whereas the quatrefoil belt received a completely neutral one.

However, being a longer belt, with the holes punched where they were, a tremendous amount of slack is leftover when put on by those with narrower waists. Not a difficult fix, but something to keep in mind if you have a slender figure. When we cinched it all the way down to where it should be on her waist, even though there was no hole there, the tail fell so long that she said it made her look “short and stumpy.” On me though, it looks great. I have a longer waist and taller legs, so the long belt has a very proportional look

Style-wise, I was worried if the red belt would fit into my personal wardrobe. It’s a bit too fancy for my green and white lower class surcote-y style. I assumed it would blend into into my red cotehardie, but fortunately it actually contrasts even better than the black and brown belts I have.

If you include the cost of shipping, the $50 price point is a slightly higher bracket than the quatrefoil belt. It’s not so much a “skip dinner out once and you can afford it” kind of belt, but it certainly is a reasonable saving’s goal if you want something medieval-ish but not “bog find” accurate and up your kit from hum-drum to fancy.