Lord of Battles, makers of the Leather Medieval Belt with Quatrefoil Brass Studs that I reviewed a while back, sent me another one of those belts specifically for review. Judging by what they saw of the piece I had, they believed it was an exception and not representative of their quality. While I was in no way dissatisfied with the belt, I respect their commitment and pride in their product, and agreed to give the belt another look at. This item has been sent to me in accordance with my review policy and is being reviewed in good faith. The fact that they gave it to me will not sway my commentary for good or bad.

The last time I bought the belt I hadn’t thought to review it first, so I didn’t keep track of travel time (which is really more of a review of Kult of Athena’s practices than it is Lord of Battles or the belt itself, really) and this time around since it was being sent direct to me from the manufacturer, I still have no real frame of reference for what a “common” wait time will be to get one of these to your door from the day of purchase. 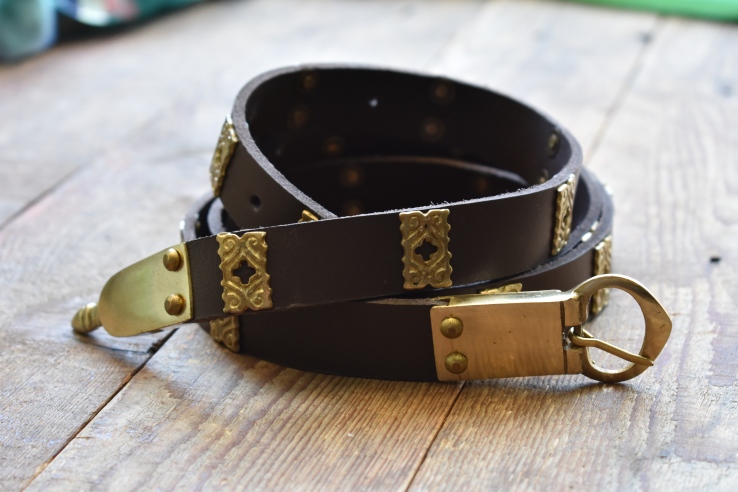 I took the belt and did a complete once over again, taking all the same measurements I did before in the interest of comparing the two; a test of quality control so to speak. While I won’t besmirch their integrity by alleging that they would either find or make an exemplar that doesn’t match the majority of their stock; I expect that the one I received was scrutinized to at least not have any outrageous defects. Considering the near year gap between when I bought my first belt and when they sent me this one, they are very consistent when it comes to production quality. All the major dimensions (width, mount spacing, buckle size, chape size, etc.) are all the same as the other belt, and those dimensions are included in the original review. This belt did have one hole that was set 2″ from one of the holes next to it, but really when many of the holes are 1 7/8″ apart, that’s not that big. I think the offending hole had to be shifted slightly to accommodate a nearby mount. The hole closet to the buckle was at about the same spot, but the farthest hole from the buckle was at almost 47 3/4 “; much more room than the other one I bought had.

As is typical for this belt, the mounts are all fairly straight and though there’s a variance between their spacing, it’s a slight variance that you can only really notice when you’re laying it flat and inspecting it. I can honestly say it’s impossible to notice once on the waist and the contour of your body makes perspective of 1/8 of an inch impossible to really gauge even at conversational distances.

The two major improvements you’ll see on the one I received are the rivets on the belt buckle part, and the quality of the casting of the chape. We’ll start with the chape. 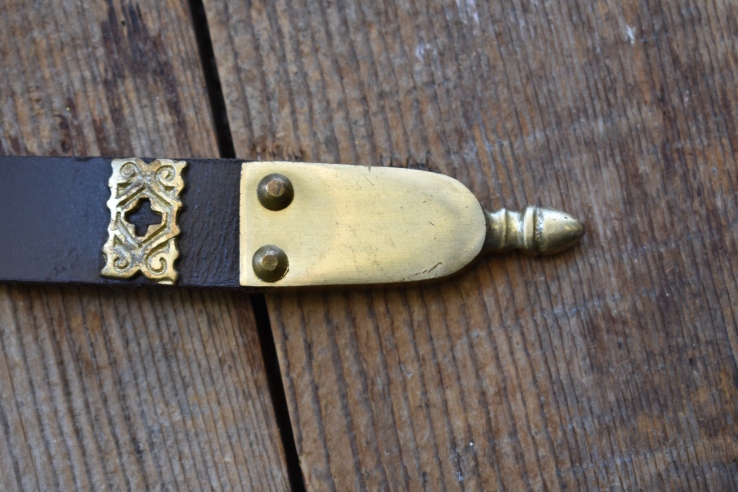 You’ll see that the “neck” between the flat part and the point is much more smooth and pleasant in this belt. It also looks much more like the promotional picture online. When I reviewed my first belt I threw out possible reasons for the belt to look that way, but my best assumption was that the blog on the chape was a casting defect. 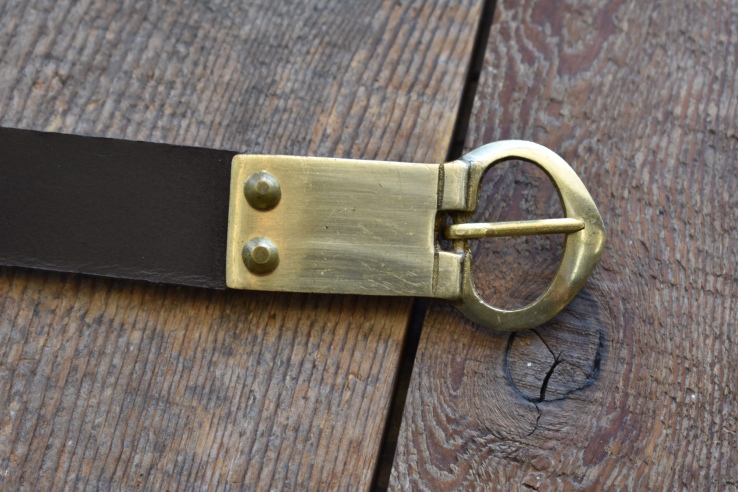 The buckle on the other hand has two very evenly spaced, equally sized rivets of similar color. My old belt didn’t have that, however one of the promo-pictures on Kult of Athena, if you look very closely at the picture, also has a buckle rivet that looks off. I still contend that if any part of this belt is going to be aesthetically weak, the rivets on the buckle itself are the absolute best place for it, because when you wear the belt properly with the long end half-hitched over the end of the buckle it’s a completely invisible defect. Even the ugly rivet on the other belt is solid and won’t fail structurally.

A couple things I didn’t think to measure in the other review that I looked at today: this belt had 30 total mounts. It is 61 1/4″ from top of buckle to tip of chape. One thing I never thought about doing for the other review, that I took the opportunity to do with this review, is to do some perspective shots. There’s an image of it on a person, or maybe it’s a manquin, but I have no idea how big that form is. I am 6’3″ with a 38″ waist. I chose my modern clothes on purpose, even though the belt doesn’t look quite right with it. Period clothing has a lot of variance, length of tunic, volume of excess fabric, where on the body the waist pinches, etc. My jeans sit at my natural waist and being dressed in “standard” outfit gives very easy to understand perspective, especially for the newer reenactor who doesn’t have much of an eye for period clothing yet.

All things considered I never disliked this belt. It’s a great entry level design for those who are willing to spend the cost of a mediocre dinner-out to up their look. It’s a league better than uninspired and unhistorical leather ring belts and superior in every way to modern buckled belts. Even if it’s not documentable, it clearly has the look, feel, and heart of medieval belts.

Being able to hold two of these side by side and acknowledge that they are fairly similar gives me confidence that all the good things that I like about this belt will be consistently produced for whomever buys one. I am willing to accept that I was uniquely unlucky getting both a bad chape and a bad rivet on the buckle. I suspect that the rivet issues on the buckle are more prevalent than the casting issues on the chape. As I said above, assuming there’s no structural issue down the line, an ugly rivet in an invisible spot is a hard thing to really hold against a product.

The quatrefoil belt from Lord of Battles has a very specific place in the reenactment market. It’s not a high end stun-the-common-folk accessory. The purpose that it serves, creating a wealthier aesthetic with reasonable historicity at an affordable price for the average reenactor or SCAdian, it serves very well.