I’m going to try something a little new. I am a researcher, a reader, and a worrier when it comes to choosing things. When it comes to spending money on hobby stuff my anxiety and over-analytical bent gets intensified. Whenever possible I try to gather as much information on a product before purchase. While that’s easy for products carried by big stores like Amazon, Ikea, or Wal-Mart where thousands of people have interacted with their merchandise and then wrote reviews: most of the stuff “we” as a living history community buy don’t benefit from that kind of publicity or public review. Short of peer-to-peer recommendations and anecdotes (which are valuable,) it’s hit or miss on if you’re going to find user reviews on reenactment-stuff. Worse, where you can count on hundreds of reviews through a big-box website to give you multiple different kinds of information, if you’re lucky a living history item will have one review by one person of indeterminate sanity or usefulness. I hope to change that in some small way by conducting a series of detailed reviews of available wares and clothing as I can get my hands on them.

First up, the Leather Medieval Belt with Quatrefoil Brass Studs by Lord of Battles. Wow, that was a mouthful. I purchased this belt through Kult of Athena (a retailer of products from companies like this) and they sent it out to me quickly. I don’t remember exactly how long I had to wait for it, I didn’t decide to review the belt when I bought it, but I know for a fact that I was impressed with how quickly it showed up. I’m always impressed by how quickly Kult of Athena manages to handle their shipping.

The belt is made by Lord of Battles, a company out of Dehra Dun, India and they don’t sell their products directly. They also work with cinema, their Facebook and Website proudly display pictures of people in armor from the TV Show Merlin, for which I presume they made the armored costume that the principle talent wears. Their online catalog is expansive and they seem to produce a little bit of everything from armor to clothing to camp gear. As for this particular belt, the description on Kult of Athena is succinct and accurate, if a bit brief. The pictures posted are representative of what you receive and are not a misleading “hero product” that is made to a level of quality superior than what you’re sold.  The belt matches the 7/8” (2.22 cm) listed width, with a consistent and regular width the length of the belt. If you’re really worried about thickness, the actual buckle part of the belt buckle is 1 1/4” (3.18 cm) wide. The chape is 2 1/4” (5.72 cm q) long while the buckle is 2 3/8” (6 cm) long.

The spacing of the quatrefoil mounts are not perfectly spaced, though the variance isn’t terribly big.

I measured the distance of every gap between mounts and none were closer than 1 1/8” (2.86 cm) or wider than 1 1/2” (3.81 cm) with the majority of them at the 1 1/4”-sh (3.18 cm) mark. While the deviation is technically slight, it’s still big enough to notice. The holes between the mounts are a bit more consistent, being 1 3/4 – 1 7/8” (4.45 – 4.76 cm) apart. The belt comes punched with a series of holes, the first of which starts at 34” (86.36 cm) from the buckle. The farthest pre-made hole is 43” (109.22 cm) from the buckle. My waist is well within that range, but when I wear the belt low on the hips in trendy 14th century fashion, or over a gambeson, I don’t have enough holes. Punching a hole wasn’t hard for me, but there was no way for me to anticipate I’d need one. If you don’t have a hole punch and you’re going to be belting around armor, or padded clothes, or you’re just built a bit thick: make friends with someone who has a leather punch before you order this. 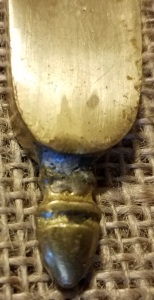 The belt is, of course, historically inspired. I don’t think the mounts or the buckle or the chape itself are replicated from any specific source or finding, but they do have a very medieval feel. The buckle and chape are probably the weakest link for this belt in general. Despite the uneven spacing, I am satisfied with how the mounts look. The other hardware… well, the belt I got has some bleh on the chape you can see here. I haven’t actually taken the time to try to clean it, so I don’t know if it’s a weld, or corrosion, or crud from storage, or just cheap material poorly casted.

The buckle is set with some really ugly rivets. They’re not even, or the same size, and don’t match the material of the buckle itself. The only saving grace is that when the belt is buckled and the long end is knotted around the buckle, this defect is all but completely concealed. 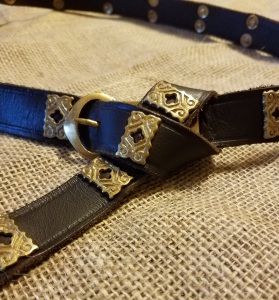 However, as I mentioned above, the pictures are very honest about the craftsmanship, I knew that the belt wasn’t going to be perfect, I just didn’t expect to notice it as much as I do.

At $36 plus shipping this belt isn’t the cheapest thing you can sling around your waist, but it is a pretty decent first belt for a newer reenactor that doesn’t want a bare-naked strap of leather. Cheesy ring-belts and basic pin buckle belts can be had for less, but they don’t have that “fancy rich-dude” flair that a belt with mounts does. It’s certainly of superior quality and consistency than I would probably do on my own and I’d bet it’s cheaper than the materials alone are if I sourced them in the states. It doesn’t pass muster for anyone who has strict authenticity standards, or for people who want to know the history and sources for the furniture on the belt itself.

Being a generic (and relatively inexpensive) medieval-y belt, don’t expect to be the only one wearing it. I met two others wearing them at the Renaissance Festival this year alone. That’s not a bad thing, always nice to meet brothers-in-consumerism, but I know some people like to look unique. Its lower grade craftsmanship and minimal cost means I really wouldn’t shed too many tears if it were damaged in any way. Unlike my fancy Lorifactor belt (review soon!), I am not terrified to wear this while fighting, or doing messy, dirty out-door type things. For now I’ve donated it to my wife’s garb when we’re going out together (until I get her a better one), but it serves double duty as my dagger belt while in harness. If it gets dented or scuffed during a bout it’ll still look okay. Even if it breaks: it’s one of the cheaper things on my kit to replace.